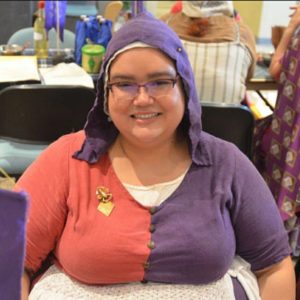 I’ve always liked cooking and experimenting in the kitchen.  As a child, I would often help in the kitchen and as a teen, I would cook dinner a few times a week. I made my first Thanksgiving dinner by myself at 14, I think that year my mother (who worked at a hospital) had to work.  I remember it being a lot of work but I felt such a sense of accomplishment when it was done.

I grew up in the Pensacola, Florida area but moved to Kansas City in December of 2008.   A few years after I moved my best friend from back home told me about the SCA.  One of the things she told me about was the feast cooking, and she predicted that I would love it.  I do have to admit, I wish I had joined back when she told me about it, but at the time, I didn’t want to join alone.

To date, I have helped with many feasts and inns (lunches), and run two feasts and one inn myself.  I’m in the process of planning two more inns that outside baronies have invited me to come and run.  This June I am planning on taking an apprentice belt from wonderful local cooking laurel, and I’m looking very forward to that.

Of course, cooking isn’t my only interest in the SCA.  I also enjoy heraldry and am a regional reporting officer in my kingdom.  I have spent quite a bit of time working as a list minister and especially enjoy working with my kingdom’s cut and thrust community.  I’m also a fledging webminister for my shire.

I do also have a husband who plays,  Garsiyya, who is an armored fighter squired to a local knight.  He does (usually) enjoy tasting my kitchen experiments.

I can be contacted at ysabeloya@gmail.com and am often at Calontir events.